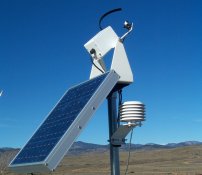 A rotating shadowband pyranometer (RSP) offers a low cost option of measuring solar radiation resources for renewable energy applications. The RSP uses a silicon-based photodiode to measure the global and diffuse solar irradiance. The control and data acquisition system computes the corresponding direct normal solar irradiance based on the geographic location of the RSP and the time of the data collection events.

The National Renewable Energy Laboratory (NREL) has obtained an RSP from Schott in October 2001. The instrument was installed at the Solar Radiation Research Laboratory (SRRL). This instrument was later upgraded to an RSP version 2 by Irradiance Inc. on June 19, 2007. The long-term performance of the RSP v2 will be compared to traditional thermopile-based radiometers located at SRRL.

By design, the RSPs offer the potential advantages of lower maintenance and calibration costs because they use a single instrument with a diffuser for determining the direct, diffuse, and global solar irradiance rather than up to three radiometers with larger optical surfaces, more complex support equipment, or more maintenance-intensive support equipment. Their potential disadvantage is the higher estimated measurement uncertainty because of factors such as the restricted spectral response of the silicon-based detector used in the RSP. Postprocessing software to account for the limited spectral response of the silicon detector could also be developed and applied the RSP data. Because the RSPs have moving parts, they should be periodically checked for slipping.